I’ve been musing as of late, about Ossie Schectman. The ninety-four-year-old basketball hall of famer, credited with making the first basket in professional basketball history, died last month. I am not a sports fanatic by any means. I rarely watch any games of anything unless I am acted on by an outside force and placed in front of one, either live or televised. It is usually just something that is happening while I’m drinking beer, which is not really necessary for the enjoyment of the beer. To be blunt, the beer happens, and the sports just happen around either side of the bottle. I am not one who needs to be doing anything while drinking. Drinking is the thing and if you are serious about it, it should require your full attention. But this Alembic entry is not about beer. It is not about sports either. Actually, I’m still trying to piece together what it’s about. I don’t lean one way or the other in matters of sport, unless there’s money involved, in which case I plead for the team that will make me the most money, which isn’t sport at all but economics, and so again this entry is not about sports.

Back to sports. Sport itself just fails to fire the necessary portion of my brain that excites me into a tortured emotional investment of sides to relish the thrill of victory, the anguish of defeat, the purchase of a numbered jersey with some fellows name stitched across the shoulders, and then the punching of the jerk who speaks ill of the player whose name is stitched across my shoulders. I’ll punch a jerk alright, just not for that reason.

Be that as it may I tend to enjoy games when I happen to be in front of them. I watch them as an anthropologist may watch some newly discovered race of titans, bigger and faster and meaner than anything imaginable. My understanding of the games is rather primitive. I suppose if it were possible to study my thoughts through one of those cartoon thought-clouds suspended over my head while I was watching any given sports match, it would reflect about an hour and a half of Atari “Pong.” (Except if I’m watching baseball, then it would look like Atari “Pong” with one paddle missing. Bowling and golf would be Atari “Pong” with both paddles missing.)

But back to Ossie Schectman and my non-sports-related blog entry. I’ve never seen a basketball game from 1946, but I suppose it probably wasn’t as fast-paced, wild, and stunning as today’s match-ups. I imagine the players from back then all acting like they were ninety-four years old even back in 1946 and so when I read the headline of Ossie Schectman passing away I read it as… “Ossie Schectman, legendary basketball player, died today. He is credited with scoring the first basket… after five missed lay-ups, three bricks and an air-ball.”

Which led me to picture the first announcers, watching this new sport, the back and forth before the first basket even went in, dialoging in an uncomfortable assessment that the whole game might’ve been a big mistake and maybe they could lower the basket, or bring more basketballs into the match, or have one player that carries a stepladder, or…. “Well Jesus H. Christ look at that, the damn thing finally went in. Folks we have a game.”

As the weeks passed, the more I thought about it, Mr. Schectman was the modern Prometheus. From that point on, no pun intended, the evolution of the sport accelerated. Look at it this way, It took four billion years or so for the first professional basket to be scored on earth, and then just twenty years later Wilt Chamberlain scored like 20,000 women, or whatever. (And they called him ‘Wilt’?)

Before Ossie Schectman the basketball announcers probably didn’t even know what to talk about.

“Well now here’s a player walking off the court to buy a hot dog from one of the vendors in the stands. And now he’s eating it. Watching the game he is supposed to be playing in. Here we have two players from opposing teams discussing property values. Should we go home?”

But now here comes Ossie Schectman, the young colt finding the balance of his shaky legs and then whoosh, taking the hell off for the far end of the court, sinking the bucket and sending the place into an uproar. By the time the game is over, I can see Mr. Schectman doing 360-degree dunks with his tongue hanging out, yelling at fans, pushing the refs, and after the first half he comes back inexplicably with a sailor’s mermaid tattooed on his neck. I have him like Elvis Presley figuring the hip movements.   I have him like Edmund Hillary standing on Everest. I have him on Omaha Beach plugging the first German. And that is the point of this blog entry. Instant evolution. How fast things progress once the initial barrier is broken. 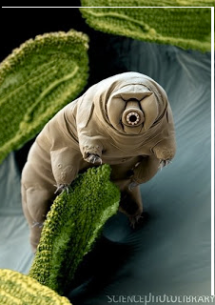 The little fellows look like a cross between a hamster and a vacuum bag and at a millimeter in length, you are definitely going to want to have them on a leash in the backyard. They are the cuddliest of the ‘Extremophiles’ which means they can exist in temperatures as low as absolute zero (no molecular movement) or as high as a lava river. They can withstand atmospheric pressure 6,000 times that of the deepest part of the ocean, and the little bastards can even survive being thrown out into space, which, if you ask me, means the ASPCA is really dropping the ball on this one. They can survive for about ten years without food and you can drop an atom bomb on them and they just roll their backs in the radioactivity and dare you to do it again. Point being is now that we know this is possible, how long will it take for us to figure out how to mimic these adorable little thrill seekers? Everything is impossible until someone or something does it, and that is the point of this blog.

So when my motivation is sapped, and the creative energies are dormant, and the problems are insoluble, I think of the tardigrade. I think of good old Ossie Schectman. And to a lesser extent I think of Turgid Chamberlain.