“Don’t drink the water at the Cecil Hotel… Don’t wear your balaclava mask to the bathroom at midnight…Ever wonder how circumcision has affected you?”

Poor, bad and foul. In Los Angeles these adjectives are normally reserved for the latest Vin Diesel sequel and not a hotel’s water supply. The movie industry was happy to lend these descriptions out, though, for a short while to the Cecil Hotel, a notorious lodging near the old Skid Row district (you can see it in the background of U2‘s video “Where The Streets Have No Name”) whose water supply had taken a turn for the worse in recent weeks. Tragically, a young Canadian tourist was found, after a saturated seventeen days, disposed of in one of the rooftop water tanks, and it was this deteriorating corpse that was causing the water to run black and the shower pressure to disappear. In these days of endless true crime entertainment everyone considers themselves somewhat of a detective, and I’m no different. It’s a juicy mystery, (turbid description of the water notwithstanding). If I were going to find the criminal, assuming it’s a ‘he’ (the vast majority of these crimes are done by men) I’d isolate the one soiled hotel guest who has curiously refused, for the whole month of February, to bathe, brush his teeth, drink water, use ice, shave, or take part in ‘high tea’. The guy who seems obsessed with dismantling his room sprinkler for fear that one toxic drop of water may hit him while putting out a deadly fire–add him to the list. It may not be a coincidence that Richard Ramirez, the infamous 80’s serial killer, was a resident of the hotel during his spree, as was the Viennese literary sensation Jack Unterweger, who took his research so seriously that he tasked to murdering hookers for that plucky suspension of disbelief so lacking in modern pulp fiction. The Cecil Hotel, at the time of Unterweger’s stay, was right in the middle of hooker central, which to Unterweger was probably like visiting that room in Willy Wonka’s chocolate factory where everything is made of candy.

It’s no wonder that hotels have been involved in health scares over the years. Take a random sampling of strangers, put them all together in a place where they don’t own anything and so are free to act as depraved as they choose toward all the amenities and bam, something disgusting is bound to happen. I once heard a story from a flight attendant who told me about a co-worker of hers who used to soak her uniform-issue pantyhose in the hotel room coffee pot after running hot water into it. (She would just pocket the complimentary coffee grounds pouch for a later date, I suppose). A reason why was not forthcoming. That story still makes me churn a bit, and I’m happy to say that since I was apprised of this strange habit I’ve naturally avoided coffee from hotel room pots, and I don’t feel like I’ve suffered for my abstinence. Now, after the Cecil Hotel’s grisly discovery, it’s nice to know the shower and sink are off limits. When the rats start coming up through the toilets, I suppose it will be a life of seclusion for me.

Speaking of toilets. It is a doomed and inept burglar who searches out the lavatory first. As a rule the valuables are rarely kept in that part of the house. Even the people who consider themselves clever enough to hide their grandmother’s pearls in the  shaving canister with the false bottom will usually grow fidgety about accidentally tossing out the ol Burma Shave and so will just lazily stick the whole Barbasol can into the underwear drawer and hope for the best. I refer now to Oscar Pistorius, the Olympic athlete who manically fired multiple rounds through the door of his bathroom for fear that a burglar was hidden there; a burglar who not only meant to do him harm but also had an eerie knack for voice impressions of female South African models. I talked to a business traveler the other day who said he had been sleeping next to his wife for twenty-some-odd years and had yet to shoot her dead, even though they were both gun owners and restless sleepers. There had been many groggy nights, he said, in which one or the other may have gotten out of bed in the dead of night. I now took him to be an expert on the subject and so let him go while he explained that typically there are two reasons a sleeping person may get out of bed. First is usually to use the bathroom. It is a considerate spouse who will remove themselves from the bed instead of just pissing where they lay in the hopes that whatever mess they’ve made will just work itself out before the morning comes, and obviously one of the main reasons this man’s marriage had lasted for as long as it had.  The other is usually a kitchen visit. Drink of something. Leftover snack. Caution should be exercised when firing upon a supposed intruder, particularly shuffling around in pajamas or a bathrobe in the kitchen or the bathroom, was his main point. Most expert burglars will know to relieve themselves before they enter a house. As a matter of practicality, who wants to be woken up by a cascade of toilet water from the very thief who has swiped the jewelry box along with the flat screen television and any electronics they can get their hands on. It’s just not good business sense.

Speaking of business, I happened upon a strange business card sitting on a washbasin in the airport bathroom the other day, so strange that it seemed like a joke. But upon reading it I realized there never was a more serious issue and that I had done well to discover it. On the left side of the card was an abstract rendering of a penis and a bold caption in the middle that posed the rhetorical question of how circumcision had affected me? For reasons of extreme youth or just because I had mentally walled off such a traumatic event, I couldn’t remember having one. The back of the card had the voluble didacticism of a Tolstoy novel in which it listed the reasons foreskin was useful and how the lack of it went a significant way to ruining a man’s pursuit of pleasure and ergo health, both physical and mental, in general. I know in some cultures it is a time honored tradition to eat the foreskin, and so in those cases it is really not a loss but more of a reassignment. The  card was advertising foreskin restoration. After 30+ years of being separated I thought it a slim chance that they would be able to locate my foreskin. For all I knew it had made its own life for itself, doing quite well down in the islands, mixing daquiries for well-heeled tourists and lazing about. Then it occurred to me that they may use someone else’s foreskin, like an organ donor situation. “Poor bastard died in a car crash, but at least his eyes, liver, heart and foreskin weren’t damaged. Rest assured, newly departed, some tugging fiend is going to have a proper ecstatic rush, in his chat room tonight, because of you.” It was such an uncomfortable conjecture that I didn’t even do any more research into it. Some pieces of skin vellum are better left hidden. (But I still have the card.)

More distillations from the alembic soon. 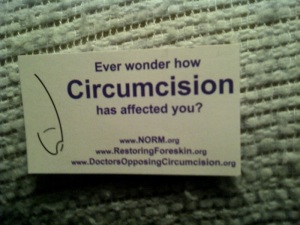